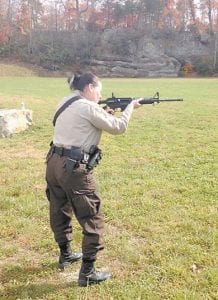 Members of the Letcher County Sheriff ’s Department have been practicing shooting new rifles purchased for them with a grant from Homeland Security.

“Policing has changed so much,” said Letcher County Sheriff Danny Webb. “We always had handguns and shotguns. We run up against people armed with assault weapons and high-powered rifles.”

With the $8,900 grant, eight sheriff ’s deputies received AR-15 rifles and training on October 22 and 23. The police officers are now certified to carry the rifl es, which were purchased from Doublestar Corp. in Winchester.

“The rifles are ballistically safer than the weapons we carry,” said Lt. Brian Damron of the sheriff ’s department.

Webb said the grant enables deputies to carry rifles in cruisers for their protection.

“We are faced with more dangerous situations,” said Webb. “We will be better prepared to handle situations.”