By MICHELLE LOCKE For The Associated Press 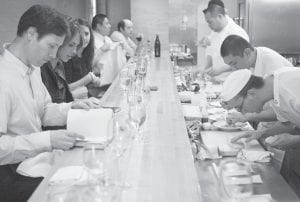 David Chang, upper right, and his chefs as they prepare food directly in front of patrons at the bar of Momofuku Ko in New York. (AP Photo/Seth Wenig)

Grant Achatz is happy that food bloggers are so excited about dining at his renowned Alinea restaurant in Chicago that they want to shoot photos and even video of their experience. And he embraces the Web as the new medium for disseminating dining information.

But he does wish they’d just sit and enjoy their food while it’s hot.

“It’s a double-edged sword for everybody,” he says. “The guest makes the choice whether or not to prioritize documentation of the food, of the experience, and perhaps subject themselves to a lesser experience, or a less complete absorption of the vision of the restaurant or the chef.”

Take the diner who recently ordered a signature dish, Hot Potato-Cold Potato, in which a marble-sized sphere of piping hot Yukon Gold is dropped into a bowl of 40-degree potato soup at the pull of a pin. Eating it at the proper temperature is key to the experience.

Yet by the time the food had been moved around to get the right lighting for photos — taken with a tripodmounted camera — what the blogger probably ended up with was Warm Potato- Warm Potato, says Achatz.

Still, he says, “I’m never that grumpy guy that’s like, ‘Put that camera away!’”

“At times we have guests that are a little bit rude or presumptuous about it and that kind of offends me a little bit,” he says. “Even then we let them do their thing.”

The tradition of documenting dinner stretches back centuries. Eighteenthcentury English parson James Woodforde, dutifully recorded his meals along with other details of his life and times in his still-popular diaries.

But Woodforde didn’t have a tripod. Or a blog to feed.

Today’s bloggers may be armed with anything from a small camera phone to professional equipment complete with strobe lighting.

Scott Ashkenaz, a Palo Alto, Calif., photographer, believes it is possible to both record and enjoy the moment. “It’s pretty easy to pick up the camera, take a shot and then continue on,” he says.

He’s found that restaurant staff have been accommodating to him and his wife, also a photographer, once even bringing over a candle to boost the lighting and warning them when they need to eat a dish fairly quickly to get it at its best. The couple has posted shots of memorable meals on their website, ashkeling. com, including a dinner at the famous Spanish restaurant El Bulli and The Fat Duck in England.

Chuck Arendt of San Francisco, who writes about food at chuckeats.com and is co-founder of MainPursuit, a travel app publisher, says he understands “no flash” rules, and agrees that people who take photos to an extreme — 20 shots of one dish — can be annoying.

He aims for two to four pictures, taken quickly. But he hesitates before going to a restaurant with a camera ban.

“It is my food and I should be able to do what I like with it,” he said in an e-mail. “I can understand ‘creating a mood,’ but that’s generally not a place I want to visit.

Achatz recently expressed his frustration with overzealous bloggers in an Internet post that Arendt read and thought reasonable.

“People should be allowed to take photos; restaurants should not only see it as a compliment, but also a potential word-of-mouth recommendation to 20-30 people on average, and I think it’s in restaurants’ best interests to accommodate them just a bit more, better lighting for example,” Arendt said.

He recently ran a “Surfer Sunday” special at the Ditch Plains restaurant and within a day and a half a review and pictures were up on the Web.

“It just gets the word out quicker,” he says. Murphy sees blogs as introducing an egalitarian note to restaurant criticism. “The world’s changing, everybody’s got an opinion,” he said.

Chef David Chang doesn’t allow cameras at his wildly popular Momofuku Ko restaurant in New York. But he says that’s only because the intimate, 12-seater restaurant simply isn’t big enough. “It was intrusive on other guests.”

At his other restaurants, including Ma Peche, there’s more space and he doesn’t object to cameras.

He can understand why people want to photograph memorable meals, but he occasionally wonders, “What happened to eating your food and having conversation?”

A side issue with cameras in restaurants — unless you know what you’re doing, most of the pictures aren’t going to turn out that well. It takes skill to make a dish look tasty.

“Every once in a while I see something nice on a blog, but not tons of things,” says Delores Custer, a longtime industry veteran and author of a recently published book on food photography called “Food Styling.”

Among her how-tos, consider food at eye-level and overhead, not just at a 45-degree angle, and get a tight focus on the plate.

Overall, “you have to respect the place that you’re in — the people who are there, the chef who has worked very hard to produce a lovely ambiance,” Custer says.

Sometimes that’s missing, and the post by Achatz didn’t result in fewer camera toting diners; interest has only increased in Alinea, named the No. 1 U.S. restaurant recently by Restaurant Magazine.

“I’m excited that people are excited about what we’re doing,” he says.

But he wonders whether the documentarians are missing out.

“The priority becomes capturing that memory,” he says. “When in fact there is no memory because you didn’t actually live in that moment.”