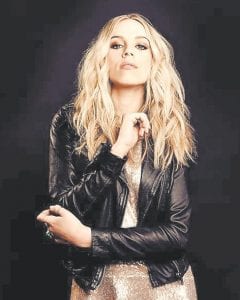 Brill, a Knoxville, Tennessee native whose work has drawn comparisons to Bonnie Raitt, Brandi Carlile, and Mary Chapin Carpenter, is on tour to support her new album, Shut Eye, which is scheduled to be released on May 19.

Since releasing her debut album, Walking Wires, in 2013, the 25-year-old Brill has proven herself to be one of the most important young artists in Nashville today. With a stunning voice that goes toe to toe with Nashville’s finest, the young singer opts for grit and authenticity over pristine pop in her song choices.

Outlets like Billboard, CMT Edge, Country Weekly, Pollstar, and CMA Close Up Magazine have already shown their support for her refreshingly authentic sound, imbued with a “bluesy American grit” (Southern Living) that sets her apart as “a far cry from the slick pop country of many of her contemporaries” (The Boot). That Nashville Sound dubbed ‘Walking Wires’ one of the “Top 10 Country Albums of 2013.”

It seems that both Americana and country music fans nationwide agree, as Logan has appeared since her release on sold-out bills in markets from Nashville to Chicago to Washington, DC, including acoustic opening spots with artists like Steve Earle, Josh Turner, Jerry Douglas, Leon Russell, Ashley Monroe, Gary Allan, and Todd Snider, as well as with her band at national concert events like Virginia Beach’s Patriotic Festival with The Band Perry and Cincinnati’s first annual Buckle Up Festival with headliners Allison Kraus, Willie Nelson, and David Nail.

In 2014, Brill made her NPR Mountain Stage debut, had a nationally televised appearance on WGN News, and won a large donation for the Colorado Children’s Hospital at KNCI Sacramento’s Golf & Guitars event alongside other tied first place winners Brett Eldredge and Thomas Rhett. She had two songs featured on VH1 Television’s “Couples Therapy” episodes and was invited to join the Country Music Hall of Fame’s Artist Membership Program.

In addition to releasing her new album this spring, Brill will perform at North Carolina’s famed roots festival, Merlefest, and California’s largest country music festival, Stagecoach. She will also make her Grand Ole Opry debut in addition to touring with icons Merle Haggard and Dwight Yoakam.

Admission to the April 10 show at Summit City is $12. Opening the show will be special guests Amanda & Ryan featuring Tyra Madison. Persons wishing more information may call Summit City at 633-2715 or promoter Greg Napier at 1-606-434-8648.