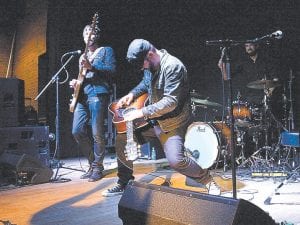 The Record Company, a Los Angeles blues-rock band whose single “Off the Ground” is in the Top 10 on Billboard magazine’s AAA radio charts, opened their first headlining tour to an enthusiastic audience at Appalshop in Whitesburg on March 26. The 18-stop tour, which includes a date at the famed Mercury Lounge in New York City, is being held in support of the band’s debut album, “Give It Back to You.” Band members include guitarist/singer Chris Vos (center), bassist Alex Stiff (left), and drummer Marc Carzorla. (Photo by Thomas Biggs, special to The Mountain Eagle)