Rites are held for Eugene Meade, 67 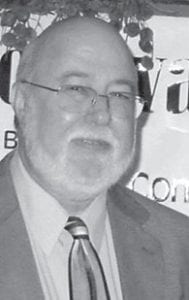 Mr. Meade had been in poor health for several years and he loved to travel.