Rites are held for Rudolph Collins 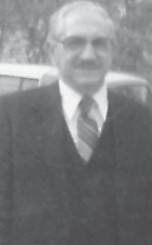 He was a U.S. Army veteran, and served during World War II, He was a member of the Whitesburg First Baptist Church.

Surviving are his wife, Daisy Collins, and two brothers, Frank Collins of Louisville, and Colan Collins of Isom.

Funeral services were held January 8 at Everidge Funeral Home in Whitesburg. Burial was in the B.F. Collins family cemetery at Isom.