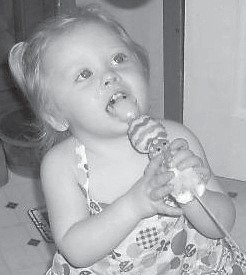 Funeral services were held in Berea last week for a two-year-old girl who died from injuries sustained in an all-terrain vehicle wreck in Jenkins on August 26.

Alicia Rennee Faye “Sissy” Sturgill, of Jenkins, was riding on an ATV with her father, Robert Anthony Sturgill, a three-year-old boy and a 17-year-old juvenile. She was fatally injured after the ATV flipped backward as Robert Sturgill attempted to drive the vehicle up a steep incline on a dirt road on Brickyard Hill, according to Jenkins Police Chief Thomas Bormes.

Alicia Sturgill was flown by helicopter to Holston Valley Medical Center in Kingsport, Tenn. where she was pronounced dead. A preliminary autopsy report lists head trauma as the cause of death, said Letcher County Coroner Marty Baker.

Funeral services for the child were held August 30 at Reppert Funeral Home in Berea.

Robert Sturgill, 30, a sanitation worker for the City of Jenkins, was charged with second-degree manslaughter, two counts of first-degree wanton endangerment and operating a motor vehicle under the influence of alcohol/ drugs (second offense). He continues to be held in the Letcher County Jail. Bond is set at $500,000 cash.

Sturgill is scheduled to appear in Letcher District Court at 1 p.m. Thursday for a preliminary hearing.