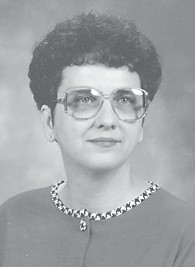 Funeral services for Barbara Ison, 68, were held June 21 at Everidge Funeral Home. Burial was in the Wesley Roark Cemetery at Ingrams Creek.

A daughter of the late Curtis Helton and Madeline Roark Cornett, she was born at Benham. She died June 18 at Wellmont Bristol Regional Medical Center in Bristol, Tenn.

She was graduated from Kingdom Come Settlement School in 1959, and from Union College in Barbourville in 1965. She was a school teacher for more than 32 years.

Survivors include two sisters, Lynda Crase and Sandra Roark, both of Linefork; a brother, Michael Helton, Cowan; and an uncle, Kenneth Roark of Port Richey, Fla.