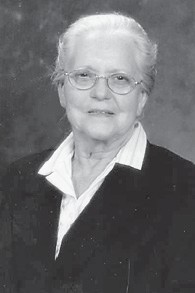 Bonnie Browning, 92, died July 9 at her home in Delphia.

A daughter of the late Mark H. and Lola Banks Creech, she was the widow of Joe Browning.

She was the mother of the late Gary Combs, and a sister of the late Burley Creech, Carl Creech, Mark Ed Creech, and Donald Creech.

Funeral services for Mrs. Browning were held July 12 at Letcher Funeral Home in Whitesburg. Burial was in the Gideon Ison Cemetery at Linefork.