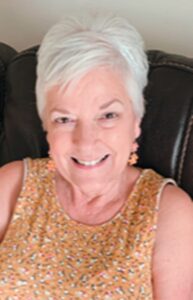 Faith and family were of utmost importance to her.

Born in Whitesburg, she moved to Louisville at 15 years of age and became a resident of Shelbyville two years ago. She was a secretary and bookkeeper for Richards Roofing and Sheetmetal for 25 years, worked for the Louisville Metro Police Department for 16 years and worked one year for the school system in Jackson. She worked at Toyota for just shy of five years with a great group of people that she called her work family.

She is survived by her daughters, Brandie Mour, April Cerra and husband Jason, and Amanda Richards; her bonus daughter, Andrea Tuddle Plummer; her grandchildren, Anthony and Isaiah Hiben, Lillie Mour, and Tavian and Thyme Drake; her ex-husband after 30 years Mark Richards and wife Allison; her brothers, Jimmy Day and wife Wanda, David Day and wife Gaye, and Lonzo Day and wife Mary; a sister Susan Clair and husband Cecil; and her close friend of almost 40 years, Betty Johnson.