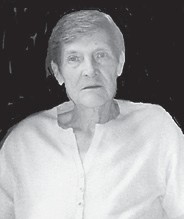 Funeral services for Doris Jean Cole Sparkman, 83, of Hallie, were held December 5 at the Bethanna Baptist Church. Burial was in the family cemetery at Hallie.

A daughter of the late Willie and Goldie Cornett Cole, she died December 2 at the Greg and Noreen Wells Hospice Care Center in Hazard.

She was the widow of Bill Sparkman, and a sister of the late Thelma Turner and Albert Wayne Cole.