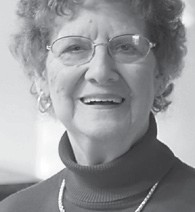 Funeral services for Elizabeth Ann Fleenor Fairchild, 88, were held May 15 at Letcher Funeral Home. Burial was in the American Legion Cemetery in Whitesburg.

Mrs. Fairchild was the daughter of the late John Patton Fleenor and Sarah Pearl Wells Fleenor and the widow of Lloyd Waugh Fairchild. She died May 12.

She was also preceded in death by her sisters Willow Rose and Violet, her brother John, and her son John Kenton Fairchild.

She loved to cook for her family, garden, and read.