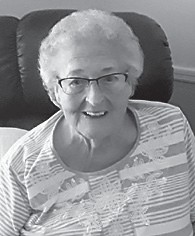 Ernestine Meade, 85, died August 16 at her home at Kingscreek.

Mrs. Meade was a daughter of the late John D. and Rachel Fields Jones, and was an active member of the Cowan Community Homemakers Club for many years.

Funeral services were held August 18 at the Faith Community Church. Entombment was at the Green Acres Cemetery in Ermine.