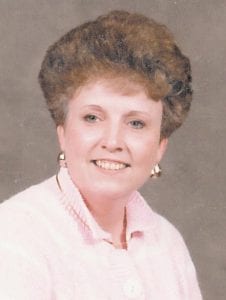 Funeral services were held Saturday for a Sergent woman who died of smoke inhalation after her home caught fire Thursday.

Betty Joe Fields, 66, of 92 Down Hill Drive, was pronounced dead at 7:48 a.m. by Letcher County Coroner Marty Baker. Her body was found after a neighbor leaving for work saw the fire and called 9-1-1 at 7:07 a.m., Baker said. Fields, who lived alone, had been sleeping in the bedroom of her home located near the Thornton Cemetery. The bedroom did not burn.

The Mayking Volunteer Fire Department was dispatched to the scene and arrived within minutes of notification of the fire, according to a press release from the Kentucky State Police.

Deputy State Fire Marshal Robert Keith and KSP Arson Investigator Randy Gabbard were at scene after 10:30 a.m. on Sept. 5 trying to determine the cause of the fire.

KSP Detective Randy Combs and Gabbard have charge of the investigation.

Mrs. Fields was the daughter of the late Harvey and Oliva Bailey Caudill. She was the widow of Rich- ard B. Fields.