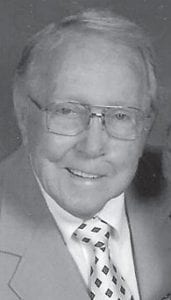 A member of Trinity Presbyterian Church, he was a former president of the Whitesburg Lions Club.

He was a graduate of Picadome High School in Lexington, and served in the U.S. Army in the Signal Service Group #4025 in New Guinea and Luzon, South Philippines during World War II. He was a general manager for Midco Equipment Company for several years prior to retirement.

He was preceded in death by his parents, Rosa and Emmett Blair.

Funeral services were held February 25 in Louisville. Burial was at Cave Hill Cemetery.