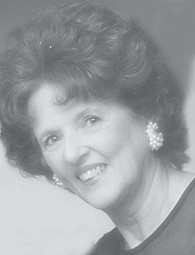 Born in Letcher County to the late James and Adeline Collins, she was a sister of the late Orel Collins and Juanita Bentley. She was married to Wallace Longmire on September 24, 1949 in Whitesburg.

She was graduated from Old Dominion University in Norfolk, Va., and was a teacher at Baylick Pine’s School in Virginia Beach, Va.

She was a member of Burnside Methodist Church and liked quilting and dancing.