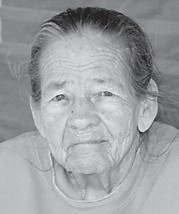 A daughter of the late John and Minnie Gibson Sexton, she was the widow of Chester Humphrey.

She was also preceded in death by six half siblings, Troll Sexton, George Sexton, Buddy Sexton, Ollie, Madgalene, and Lovetas, and a grandson, Brian Collins, and great-grandson, Seth Warlick.

Funeral services for Mrs. Humphrey were held January 1 at the Lighthouse Church. Burial was in the Thornton Cemetery at Thornton.