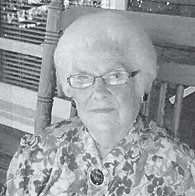 A daughter of the late Letcher and Lillie Collins, she was the widow of James W. “Jimmy” Buttrey.

She was a grandmother of the late Carl Jason Adams, and the mother-in-law of the late Gary Neal Adams.

She served on the board of MCHC for several years, was involved in the Domestic Violence Program, and was a founding member of the Isom Day Committee.

She was a social worker for the Cabinet for Human Resources for 35 years, and had worked with the Letcher County Health Department.

Burial was in the Letcher Collins Cemetery on Little Colly on a farm where she was born and reared.