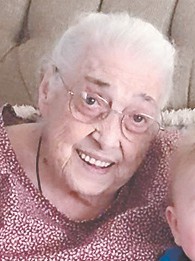 Born in Blackey to the late Floyd and Rebecca Dixon Back, she had spent her early life in Kentucky, moving to southwest Virginia in 1967.

Mrs. Caudill was the widow of R.D. Caudill, and the mother of the late Wanda June Caudill, who died in infancy.

She was also preceded in death by a daughter-in-law, Carol Caudill; three brothers, Pearl Back, William Back, Wallace Back; a sister, Mary Campbell; and several infant siblings.

Funeral services were held June 28 at Honaker Funeral Home in Honaker, Va. Interment was in the Greenhills Memory Gardens at Claypool Hill, Va.

In lieu of flowers, memorial contributions may be made in her honor to Mount Olivet Old Regular Baptist Church, c/o Curtis Caudill, 1366 Highway 2035, Whitesburg, KY 41858.

Online condolences may be made at www.honakerfuneralhome.net.