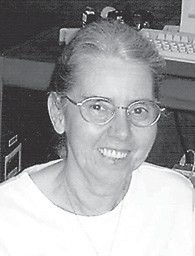 Born in Hazard to the late Vernie and Verna Dixon Caudill, she was a sister of the late Josephine Bell.

She was a librarian at Hillview Public Library in Louisville. Survivors include her husband of 45 years, Hansford Whitaker; a son, Leander Whitaker and wife Teresa of Pekin, Ind.; four brothers, Alan Caudill of Humble, Tex., Hansel Caudill of Hopewell, Va., Kenneth Ray Caudill of Stanford, and Russell Caudill of Lancaster; and two sisters, Veneda Phillips of Stanford, and Geneva McKinney of Hamilton, Oh.

Funeral services were held December 30. Burial will be in Double Springs Cemetery in Waynesburg.