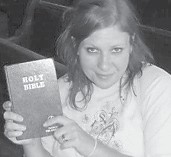 She was a daughter of George and Aileen Slone Couch of Thornton.

Funeral services were held January 27 at the Lighthouse Church. Burial was in the Couch Cemetery at Colson.