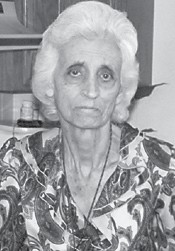 Myrtle Stewart Ihrig, 93, died December 31 at her home in Whitesburg.

A daughter of the late George and Delphia Meade Stewart, she was the widow of Charles Ihrig.

She was also preceded in death by a brother, Paul Stewart, and two sisters, Mavis Baker and Lila Peach.

Funeral services for Mrs. Ihrig were held January 4 at Hemphill Church of Christ. Burial was in the Whitaker Cemetery at Seco.