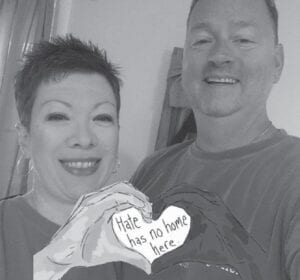 Funeral services were held Sunday for the principal of a Letcher County elementary school who died April 8 in an automobile collision in Wolfe County.

The wreck occurred about 7 a.m., Thursday as Adams was driving to Lexington with his parents, Billy S. Adams and Connie T. Adams.

According to Kentucky State Police at Post 8 in Morehead, troopers were called to the scene at 7:05 that morning to assist with the accident. Police said their investigation showed that Ralph Wooton, 47, of Jackson, was traveling south on KY 15 driving a 2007 Ford Mustang when he crossed the center line and struck a 2020 Ford Explorer driven by Keith Adams. Adams’s parents were passengers in his vehicle and were transported by Wolfe County EMS to Kentucky River Medical Center in Jackson. Billy S. Adams was later transported by helicopter to the University of Kentucky Hospital for treatment for his injuries. 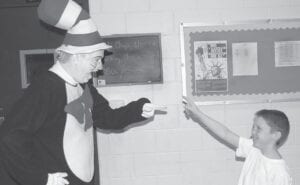 Billy Keith Adams was pleasing elementary school students by dressing up as “The Cat in the Hat” when he was still a hairdresser in this 2011 photo with student Landon Tolliver at West Whitesburg Elementary.

Both Wooton and Keith Adams died at the scene and were pronounced deceased by Wolfe County Coroner Frank Porter.

Adams was married to Anne Caudill Adams, Family Resource and Youth Services Center Director for Letcher County Public Schools. She was apparently not in the vehicle.

“ He taught English Language Arts at the high school, worked with the drama department, and was also involved in youth league soccer. He actually coached soccer at the high school,” said Josh Yonts, finance director for the Letcher County Public Schools.

“I can’t say enough good things about him. He was a good employee, a good guy and good community member. It’s going to be a loss to a lot of people.”

Superintendent Denise Yonts said Adams had worked for more than 10 years in the school district, starting when she was still assistant principal at Letcher Central High School.

“Keith’s personality was charismatic,” she said. “He had a way of making every person feel valued and important and he will be missed.”

She said Adams will be missed by the church, and by the larger community.

“He was just very upbeat, and had a very outgoing personality,” she said.

In addition to his wife and parents, Adams is survived by two sons, Aidan Adams and Sam Adams, both of Blackey.

A Celebration of Life was held April 11 at Letcher Funeral Home. Burial was in the Bill Bates Cemetery at Blackey