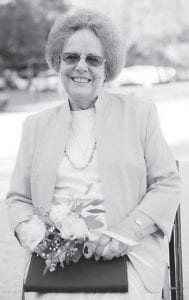 Wilma Caudill Holbrook, 80, died April 23 at her home at Deane.

Wilma worked for Quillen Drug and the QRS for 18 years, and retired from Whitesburg Appalachian Regional Hospital Home Health in 2002.

She was a member of the Old Regular Baptist faith for 39 years.

Surviving are her husband, Charlie Holbrook of Deane; two sons Greg and wife Sharon, and Ronald and wife Georgia, all of Richmond; two daughters, Kathy Hall and husband Eugene of Deane, and Anita Spicer and husband John of Ft. Myers, Fla.; a sister, Arie Wanda Moore of Whitwell, Tenn.; a brother, Larry Caudill and wife Louise of Greenfield, Ind.; nine grandchildren and their spouses, seven great-grandchildren, and two great granddaughters due in September.

Funeral services for Mrs. Holbrook were held April 28 at Letcher Funeral Home in Whitesburg. Burial was in Green Acres Cemetery at Ermine.