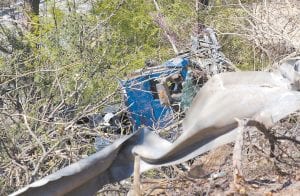 Above, the crumpled tanker truck lay on its side after the April 10 accident at Sand Hill at Gordon, near KY 160 entrance to Little Shepherd Trail. Below, rescue workers and onlookers gathered at the scene.

An Ohio man is dead after a tanker truck he was driving overturned and crashed through a guardrail on Sand Hill at Gordon.

The road was closed for several hours last Wednesday while police investigated, and while the driver’s body and the truck were recovered from the hillside.

Officials said at the scene that the Little’s Septic Service truck was apparently making too much speed down the steep grade on KY 160 and Bridges lost control. The truck turned over in a curve and skidded on its side across the highway, ripping through a guardrail before it tumbled over the side of Pine Mountain. It came to rest in multiple pieces on the hillside, just feet from a lower section of the winding mountain road.

The truck was a 10-wheel, single-unit tanker carrying waste cooking oil and grease collected from restaurant grease traps. It was not clear whether the tank leaked, however officials said some diesel was spilled from the truck’s fuel tanks. The truck was towed away about three hours after the accident. The tank was anchored and left on site to be off-loaded before it was moved. 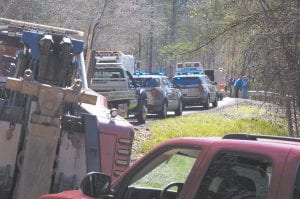 Bridges was described as “the life of the party,” and enjoyed spending time with his family. He had a fiancé, three daughters, a stepdaughter and three stepsons. Funeral services for Bridges were held Monday in Ironton, Ohio.

Sand Hill is the section of KY 160 on Pine Mountain between Gordon and Cumberland. The crash occurred about halfway down the mountain, just below Little Shepherd Trail and the gravel quarry.