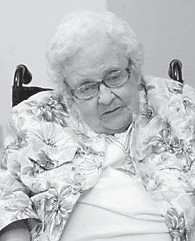 A daughter of the late Harrison and Letha Pigman Gibson, she was the widow of Curtis Combs.

Mrs. Combs was also preceded in death by four sisters and two brothers.

Funeral services for Mrs. Combs will be held tomorrow, August 18, at noon at Letcher Funeral Home in Whitesburg. Burial will follow in the Harrison Gibson Cemetery at Isom.