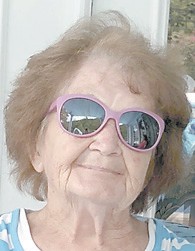 Funeral services for Ruth Velour Hogg Combs, 93, will be held at 1 p.m. today (Wednesday, March 11) at Defeated Creek Church. Burial will follow in the family cemetery at Linefork.

Mrs. Combs was a daughter of the late Matt and Suzanna Cornett and the widow of Lyttle Combs. She died March 9 at her home at Linefork.