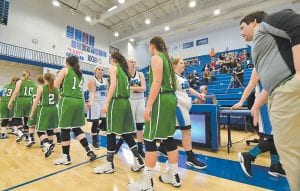 Players for Jenkins and Letcher County Central shook hands Saturday night after a game that marked what appears to be the last meaningful regular season basketball game played between the two schools. Jenkins is leaving the 53rd District and 14th Region. (Photo by Chris Anderson)

We witnessed history over the weekend.

And with those two games … history.

Letcher Central and Jenkins will never again face one another in regular season district play. Just a few weeks ago, Jenkins, which resides on the extreme edge of the 53rd District and the 14th Region, slid — or rather, was pushed — out of the 14th and into the 59th District and the 15th Region. The move was spurred by the realignment of the 15th Region, brought about by the consolidation of South Floyd and Allen Central High Schools into the new Floyd Central High School. The 15th needed another team … and Jenkins ended up being that team.

So instead of district matchups against Knott Central, Cordia, June Buchanan and, of course, Letcher Central, the Cavaliers will head north on U.S. 23 to face Shelby Valley and Pikeville, and venture down Elkhorn Creek on its way to East Ridge High School for 59th District action.

So unless the district tournament draws this year result in a Letcher Central vs. Jenkins matchup, the games Friday and Saturday may end up being the last ever between the two that matter.

Over the 11-season history of Letcher County Central sports, the Cougars — with a much a larger crop from which to choose and more consistent coaching staffs — have dominated Jenkins on the hardwood. There were exceptions early on, particularly the 2005-06 boys’ games which saw Jenkins win the first-ever matchup between the two on LCC’s home floor, and LCC win the second at Jenkins. Then there was the 2008 District Tournament win for the Cavaliers, who ended the Lady Cougars’ season with a two-point first-round victory.

Jenkins softball was a constant powerhouse over the last decade, more often than not besting Letcher Central during April Charles’s dynasty.

The rest belongs to the Cougars.

But the close proximity of Jenkins and Letcher Central, separated by around 10 miles, and the two schools both residing in Letcher County, is what made the games so special. Sitting on one side of the gymnasium, you could easily look across the floor to the other side and see people you knew, people you liked, people you didn’t. You looked at the floor and saw kids you’d watched grow up, in many cases with your own children.

Sure, it was easy to assume how the game was going to end up, but you went anyway because this matchup mattered. It was a matchup of the two remaining high schools in Letcher County. It was the final glimmer of light left over from those matchups between Jenkins, Neon, Letcher and Whitesburg that so many remember so fondly.

Unless Jenkins is once again realigned in the future into a district and region with Letcher Central, the games, save for the geographic rivalry, will be nothing more than out-of-region contests.

I was curious as to how people felt about the idea. Myself, I am on the fence. The geography makes sense for Letcher Central and Jenkins to play one another. But it doesn’t make much sense beyond Whitesburg. From Whitesburg, Jenkins is roughly 45 minutes removed from its next closest regional foe. It was sometimes necessary for Jenkins to travel all the way to Powell County or Estill County for regional tournaments, upwards of three-hour trips on mostly two-lane roads.

“While we have a long and proud tradition in Region 14, it is hard to dispute the reduction in travel costs that this move will allow,” Jenkins Superintendent Mike Genton said in a KHSAA news release.

Others are not quite as sold on the idea. Here are some comments.

— Shaun Collier, the middle school football coach at Jenkins, said: “I think change is good…. at least in district play you’re not playing 5A and 3A schools…you’re playing 2A and 1A. With that being said it’s really good schools in that district but it can’t hurt to give it a try.”

— Wesley Bryant, the girls’ basketball coach at Jenkins, said: “I’d much rather stay where we are … (but) I’m not scared of the challenge. I’ll take it and we will overcome.”

— Manis Blair, a teacher at Letcher Elementary and a volunteer for the high school sports programs, said: “As a Letcher Countian, I am not for it. It takes a natural rival and neighbor out of our region. It takes Jenkins out of the rotation for hosting a girls’ regional tourney. I could see moving Jenkins and LCC into the 15th but not just one. JBS would have been a more likely candidate with their proximity to Floyd County.”

Others see positives for developing the Jenkins middle school squads. Others don’t see much of a change for Jenkins going forward, competition-wise.

The only thing for sure, though, is that Jenkins is moving. It’s done. It’s happening. Next year. Basketball, baseball, softball and volleyball, all will be 15th Region teams next year.

I’m not sure how everyone else felt about it. For me, I had to take a moment and step back, reminisce, and just watch … watch it fade away.