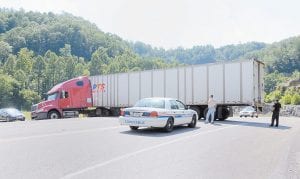 This large tractor-trailer rig blocked U.S. 23 near the Dunham section of Jenkins for more than two hours last Thursday (June 19) after becoming stuck when its “fifth wheel” bottomed out while the driver was trying to make a U-turn. Police say the truck was traveling south when the driver missed the intersection with U.S. 119 and attempted to turn and go back. District Five Constable Roger Hall and Jenkins Police Chief Jim Stephens were at the scene directing traffic.