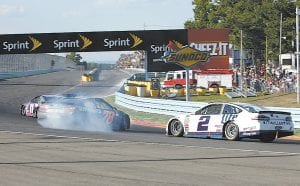 Only two road races are included on the Sprint Cup’s 36-race schedule, but with each passing season both races continue to draw more and more fans who love the kind of action that at one time was only reserved for the short tracks.

Racing at the road course tracks in Watkins Glen, New York and Sonoma, California has become so popular because it allows teams to use different strategies and drivers the opportunity to show they can do more than just make left-hand turns.

Earlier in the season when the schedule stopped at Sonoma’s road course, Tony Stewart had to make a pass on Denny Hamlin late in the last lap to secure the win. The closing laps of that race were made all the more exciting because Stewart was looking for his first win of the season that would secure his spot in the Chase field.

This Sunday at Watkins Glen it wasn’t until the last lap that one driver was allowed to see nothing but the finish line and the checkered flag through the windshield of his car. It appeared that it was going to come down to a drag race coming out of the final turn between Denny Hamlin and Martin Truex Jr., but that scenario never had the opportunity to play out as Truex was bumped by Brad Keselowski hard enough to turn him.

It was only fitting that the race would end with contact as the caution flag waved a total of eight times for 20 laps. Four of those cautions came out in the race’s final 38 laps for four multicar accidents. Those are the kind of numbers that are usually reserved for the short track races at Bristol and Martinsville.

Hamlin and his team were able to put together an error free day both in and out of the pits, which is something that proved hard for many others. NASCAR handed down a total of 30 different penalties including seven for speeding either entering or exiting the pits.

Also linking road course racing with the short tracks was the number of drivers that had a hard time keeping their tempers in check. Truex showed his displeasure with the bump he received from Keselowski by rubbing his car on the cool down lap. Kyle Larson was running sixth on the last lap when he was bumped by A.J. Allmendinger forcing him to a 29th place finish, while Allmendinger ended up with a fourth-place finish. The move left Larson fuming as the poor finish may have taken away any hope of making the Chase on points as he is now 41 points out of the final transfer position.

PIT NOTES: Hendrick Motorsports’ Jimmie Johnson’s 40thplace finish on Sunday at Watkins Glen was the first time in his career that the six-time series champion had finished last. Hendrick’s other three teams didn’t fare much better as rookie Chase Elliott’s 13thplace finish was one spot ahead of teammate Jeff Gordon, who is filling in for Dale Earnhardt Jr. as he continues to recover from symptoms of a concussion. Hendrick’s Kasey Kane continues his struggles as he now sits in the 17th spot in the points after a 20th-place finish on Sunday. Tony Stewart has a win and is 26th in the points, which makes him Chase eligible. Chris Buescher, who won last week at Pocono, is now only three points from moving into the top 30 that would make him Chase eligible. Assuming that Buescher is able to make it into the top 30 and no other driver records a win in the next four races, only four drivers will make it into the Chase by their position in the points. Ryan Newman, Chase Elliott, Austin Dillon and Jamie McMurray are locked into those four spots at this time. Kane trails 14th-place McMurray by 41 points, which may be too much of a deficit, forcing Kane to have to win one of the remaining regular season races if he wants to claim a spot in the Chase field. That could prove to be a tough task as he is yet to lead a lap this season.