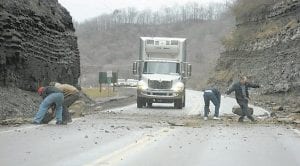 A truck driver and other passers-by joined forces on Feb. 27 to clean up rocks that fell from a cliff bridge that crosses Carr Creek Lake in Knott County. An anonymous Mountain Eagle reader who submitted the photo said the rockslide was blocking both lanes of when the truck driver started moving rocks and others joined in. Falling rocks have been a problem at the location since the road opened in the early 1970s.