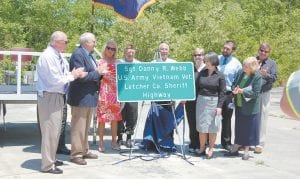 The state highway spanning from the bridge near Rite Aid in West Whitesburg to Pine Mountain Junction has been named in honor of Letcher County Sheriff Danny R. Webb.

Tuesday afternoon Webb’s wife, Sharon, told Webb she was taking him to have professional family photographs taken. Little did he know that a crowd would be gathered below the Letcher County School Bus Garage for the unveiling of a road named after him. Webb was surprised.

“It’s an honor,” he said. “I don’t know if I am deserving of this. I have really enjoyed serving the people of Letcher County.”

Darrell Holbrook, secretary of the Letcher County Veterans Memorial Museum, started the process of having a road named after Webb about two years ago when he contacted the Kentucky Transportation Cabinet.

“He is not just an official, he is a friend,” said Ward.

Webb was graduated from Whitesburg High School in 1966 and then served two years in the United States Army, including a tour of duty in Vietnam.

He spent 30 years working for Kentucky State Police. The majority of his tenure was spent in Letcher County, but he also worked at posts in Elizabethtown, Henderson and Pikeville.

Webb is a member of the Kentucky

Sheriffs Association and a board member of the Appalachian HIDTA (High Intensity Drug Trafficking Areas) program.

“I can’t think of a more fitting tribute to a man who has done so much,” said State Rep. Leslie Combs.

Letcher County holds the state record for being the county with the most bridges and roads named, said Sarah George, public information officer with the Kentucky Transportation Cabinet.

George credited Holbrook and others with the veterans museum for their efforts in getting roads and bridges named in honor of veterans.

“They do work hard to recognize veterans,” said George.