Road repairs from rain damages may cost over $5 million 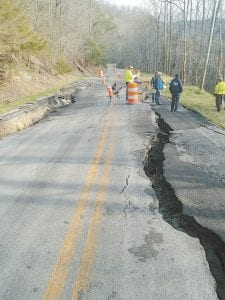 Heavy rains have caused upwards of $5 million in damage to state and county roads in Letcher County — damage that could take as much as a year to repair.

Federal Emergency Management Agency personnel were in Letcher County this week assessing damage with county and state officials. So far, the state Department of Transportation has identified $3,063,100 in estimated costs to repair state roads in this county alone, and more than $11.4 million in the seven counties served by the Pikeville District Office, spokeswoman Sara George said.

County-maintained roads in Letcher have taken between $2 million and $3 million in damages, Deputy Judge/Road Foreman Jason Back said. More than 40 mudslides have been identified, and more are coming in. 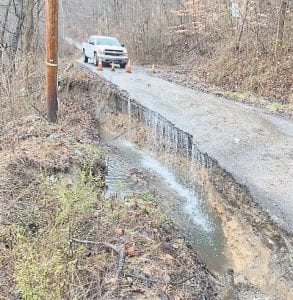 ROAD CLOSED – Water runs down the Haymond Hill Road and trickles into a creek. The road is closed because of damage from excessive rain that has undercut the road and left it too narrow for even a single vehicle. (Photo courtesy Letcher County Judge/Executive’s office)

“We’re having trouble getting enough contractors to do the work, because we don’t have the ability to do it,” Back said.

Some of the slides are only one or two excavator buckets of mud, but others are much larger, with several individual projects expected to cost more than $100,000 each.

State roads have collapsed at Linefork, Dunham Hill, and other locations, and the county has had to close roads at Yonts Fork’s Boone Mountain, and Haymond Hill. The county just finished a major repair on Elk Creek Mountain, and is about 80 percent done with a slide repair that took out two roads and a water main at Ulvah. Other roads will require steel driving to repair, and there are very few contractors that can do that type of work.

Back said the state is already 10 to 11 months behind on road projects that require steel driving and “soil nailing,” a process in which steel rods similar to mining roof bolts are placed into holes drilled in the hillsides. Steel driving costs $150 per linear foot, and soil nailing costs $350 a linear foot, Back said.

Emergencies have already been declared by the state and the county, and officials now are waiting for FEMA to approve aid. The inspectors toured most of the county on Monday and Tuesday.

The projects Back cited do not include damages to federally-funded roads such as US 119 South on Pine Mountain or KY 15X near Avonelle Drive in West Whitesburg. Those projects are not eligible for FEMA funding.