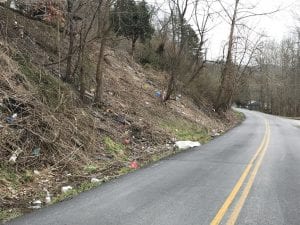 Roadside scenes like this one on on KY 1862 at Thornton are becoming more common these days in Letcher County despite the fact there is mandatory trash pickup.

Garbage strewn along Letcher County roads and a cash gift of $1,000 sparked interest and audience participation at the Letcher Fiscal Court’s February meeting this week.

Near the end of the meeting, County Treasurer Doris Jean Frazier injected an element of mystery when she told the court about an unsolicited $1,000 cash gift that arrived in January 2018. Frazier said the money came from an anonymous donor and was kept in the safe in the judge’s office for a year, because no one knew what to do with it. She told the court it is time to put the money, which was addressed to the Letcher County Sanitation Department, to use.

Frazier showed the court the brown manila envelope in which the money had arrived and pointed to the lack of a return address. She said that no instructions were sent with the cash and the only indication of the donor’s intent was the fact that it was addressed to the Sanitation Department.

Judge/Executive Terry Adams asked the court to officially accept the money and Frazier said she would deposit it in the county’s general fund, with the caveat that it be used for the sanitation department only. Adams said the money could be used to purchase badly needed safety equipment for sanitation workers.

Later, as court members were talking about problems created by recent heavy rains, one woman commented on the amount of trash thrown from cars and illegally dumped in Letcher County. This sparked a lengthy discussion, with a number of officials and audience members expressing their disgust at the amount of trash on county roads.

Judge Adams said the court is acutely aware of the problem and is exploring solutions. Most of the audience said the biggest problems are litter and illegal dumping. Bill Meade of Kingscreek said he believes the problem started when the county Dumpsters were taken out of use. Adams, in his second meeting as judge/executive, said the court is working on the problem and plans to address this and other sanitation issues.

In a related issue, County Road Foreman/Assistant Judge Jason Back told the court that the county roads have been inundated with slides and other problems caused by heavy rains. Back said the road workers have been kept so busy clearing slides from county roads that they haven’t had time for routine maintenance like cleaning ditches and clearing culverts. Judge Adams and Fourth District Magistrate William “Cheddy” Smith, who served as county road foreman before his retirement, both praised the hard work the county employees are putting in to keep roads safe.

Back and Smith also figured in a discussion about adding roads used by the public into the county road plan. Judge Adams reminded the court that it is not legal to use county money to maintain private roads, although the practice has been conducted informally for years, particularly for roads to small pubic cemeteries. Adams said he intends for the county to operate legally and in order for tax money to be spent on a road, it must be adopted into the county road plan.

Letcher County Attorney Jamie Hatton told the court that some roads haven’t been adopted, but said a road that has been in service for 15 or more years and has received maintenance (gravel, grading, etc.) can be considered a county road by “squatters’ rights” for the purpose of maintaining it. He said a landowner can also deed the county the road or the right of way to a cemetery. Hatton asked the court members to check in their districts and see if they can find out what roads need to be addressed. Jason Back said there are hundreds of gravel roads to cemeteries and hundreds of small public cemeteries in the county. Cheddy Smith agreed and said it will be a big job to get the roads cleared for adoption. Back said the county has books that list cemeteries and roads, but Hatton said the books have not been kept up to date.

“It will not be a short process,” said Smith.

Judge Adams formed a committee consisting of Back, Smith and Second District Magistrate Sherry Sexton to look into the matter. Fifth District Magistrate Bennie McCall said he will help as well. Cheddy Smith was also appointed as Letcher County representative to the LKLP Board of Directors.

Judge Adams asked the court to work with him in identifying roads and also asked Treasurer D.J. Frazier to try to come up with a solution for repairing roads to cemeteries that can be legally used as an emergency measure. Frazier said that no funds allocated to highways or roads can be used. Adams said it is his intention for the county to operate within the law.

In other business, the court awarded the bid for repairs to the Whitco Loop Bridge to Letcher County contractor Greg Hale LLC. Adams told the court that Hale had submitted the only bid, totaling $66,825 and Jason Back added that Hale’s bid had met all the requirements set out in the bid documentation. The vote was unanimous to award the contract to Hale. Adams said he wants to get started quickly but Back said the river is so high at Whitco now, it may need time to subside before the work can be done safely. Hale said that he wants to get started as soon as possible.

Code/Personnel Policy for the county. Jamie Hatton conducted the first reading of Ordinance 2019- 1 that changes the code and said the old code had presented problems since he was elected to his office eight years ago. He said there were contradictions and overlap in the old code and he had wanted to address them for quite a while. Hatton said the Kentucky Association of Counties has published a model code for counties and it will accommodate Letcher County. He said magistrates can examine the 65-page code before the next meeting and they can make whatever changes they feel are necessary.

The court voted unanimously to close the Debt Service and Depreciation accounts in the list of county funds. The funds, which appear as Letcher County Public Courthouse Debt Service and Letcher County Public Courthouse Depreciation Reserve in the Treasurer’s Report and in this newspaper, will be absorbed into the General Fund at the request of auditors.

Frazier said the two funds were mandatory when the upgrade on the courthouse was financed by the U.S. Department of Agriculture and renovated in 1997-1998, but although the county still owes over $1,930,000 on the remainder of the debt, listing of the specific accounts is no longer required and the debt can be serviced out of the General Fund. She said it is simply an accounting matter and the expenditure for paying the payments will still be reported as such in the Treasurer’s Report.

The court also voted to reimburse Sheriff Mickey Stines for funds he had spent out of pocket for training and voted to pay $2,000 from the sale of surplus police cruisers for remaining accounts from Sheriff Danny Webb so the current department can obtain the customary state advance to manage the department until tax receipts are finalized. This also allows Webb to close out his accounts.

Whitesburg Accountant Dennis Wayne Fleming presented the 2018 Outgoing Sheriff ’s Tax Settlement that closes out the settlement for former Sheriff Webb. Webb’s office collected $878,214 in 2018 and $184,846 remains to be collected, leaving an excess refund of $1,299.

The court gave tentative approval for a 20-year lease for the Hemphill Community Center to the Center Committee. Gwen Johnson acted as spokesperson for the group and told the court the Center wants to purchase solar panels to offset electrical costs. Johnson said a solar power engineer has told them the center is perfectly situated for panels and the center has applied to the Mountain Association for Community Economic Development for a high-risk loan. Johnson said the overall cost will be around $50,000, and in order to qualify, the committee either needs to own the property or have a longterm lease.

The Hemphill Community Center is part of a coalition in the Letcher County Culture Hub, consisting of the Kingscreek Fire Department, HOMES Inc., and Appalshop, and the organizations all want to install solar panels at their sites. Johnson said the committee eventually hopes to purchase the center from the county, but at present, the electrical bill is so high it is impossible to put aside enough money to pay for the building. She said House Bill 100, which was recently passed by the Kentucky Senate and is being fast tracked for quick passage in the House, will create problems if they don’t act fast. HB 100 deals with net metering for solar power generated by electrical company customers who also use solar panels or other green methods to generate electricity.

The industry has stated that the one-to-one payment for extra power generated that goes into the grid is not fair because it doesn’t account for infrastructure paid for by electrical generating companies. Solar users and other critics say House Bill 100 will effectively kill off the solar industry in Kentucky. Senate Minority Leader Morgan McGarvey of Senate District 19 in Louisville said the bill was written by the electric companies and complained about the rapid handling of the bill which was filed late last Monday and brought to the Senate floor in less than 48 hours.

Bill Meade of the Kingscreek Fire Department said it is pretty certain the bill will pass, but they can be grandfathered in under the old law. Jim Murtagh, who works for HOMES, said his organization will not only install solar panels on its buildings, the groups want to undergo training and do installations for others as well. County Attorney Hatton said he sees a problem with a long-term lease with no down payment because the county cannot give public property to a private owner, even to non-profits. He said he will research the matter and see if it can be resolved. The court voted unanimously to approve the lease pending Hatton’s OK.

Harry Collins of the Letcher County Broadband Board said that in his opinion, obtaining broadband is as important to eastern Kentucky now as extending railroad lines was in the 1930s. He said a Broadband Board meeting will be held at 6 p.m. at Letcher Middle School on Monday, February 25. The meeting is open to the public. Collins said a survey was distributed to school students in the Linefork area regarding broadband.

Bank balances for county agencies as of January 31: