By KIM CURTIS The Associated Press 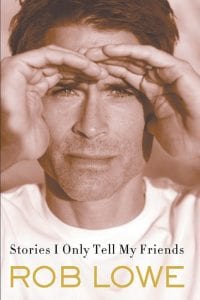 The cover of “Stories I Only Tell My Friends” by Rob Lowe. (AP)

“Stories I Only Tell My Friends” (Henry Holt), by Rob Lowe.

Imagine a 10- year- old Rob Lowe boldly knocking on the door of Liza Minnelli’s suite in a Columbus, Ohio, hotel.

“In most other areas of my life, I am slightly behind the curve, retiring, sometimes unsure,” he recounts in his autobiography, “Stories I Only Tell My Friends.” “But when it comes to anything to do with dreams of being an actor I am filled with what I would later learn is called chutzpah.”

“My name is Rob Lowe. I want to be an actor and I was hoping to meet Miss Minnelli,” he tells her husband, Jack Haley Jr., at the door. Minnelli, who was at the height of her fame, was appearing in the award-winning musical film “Cabaret.” She invites Lowe into her living room. She’s eating chocolates and drinking wine.

Lowe is mesmerized. They chat for a while about theater and music before she sends him off with a wink: “Good luck, kid. Maybe I’ll see you in Hollywood.”

Yes, Lowe is a lover of women, family and politics, his autobiography reveals, but most of all, “Stories I Only Tell My Friends” reveals his love of acting.

His retelling of a transplanted Los Angeles childhood spent auditioning, hanging out with neighbors Martin Sheen and his sons Charlie Sheen and Emilio Estevez and making movies with Sean and Chris Penn are impressive and fascinating. But they also reveal a charming naivete that makes Lowe unfailingly likable.

On the set of the 1983 film “The Outsiders,” director Francis Ford Coppola tells the young cast that they’re going to begin their days with a half-hour of tai chi. “I don’t know what tai chi is,” Lowe writes. “I look around for a delivery man. Maybe it’s some sort of Asian take-out — which would be great because I’m starving.”

“The Outsiders” section of the book — and it is substantive — is perhaps the most captivating. Lowe describes not only the grueling casting process — “a public cattle call with every important, young working actor in the universe” — but also the shooting of the film. The hours were demanding, the work was exhausting and staying in character was encouraged. The Socials and The Greasers lived on separate floors of the hotel, with the former in suites with free room service and the latter sharing modest rooms with twin beds.

Lowe’s memoir is a must-read for anyone who came of age in the ‘80s and grew up with John Hughes, the brat pack and “The Outsiders.” It’s also an increasingly rare child actor success story in which the protagonist picks his way through the minefield of fame, fortune and their trappings and emerges to tell his story as a kinder, gentler and, yes, wiser man.