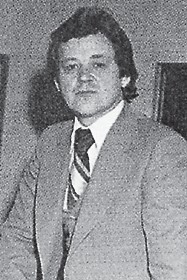 Robert Brown, 64, died August 1 at his home in Louisa.

He was retired from the Home Federal Savings and Loan Bank in 2008 after an extensive career in banking.

Brown was a former manager of the Louisa/ Fort Gay Little League team, and had served on the board of the Lawrence County Agriculture Extension Agency.

Surviving are his wife, Anita Marcum Brown; a daughter, Marla Tobia and husband Scott; two grandchildren, Easton and Laura, both of Apollo Beach, Fla.; two sisters, Violet Watts and husband Bernard of Black- ey, and Rose Marie Murray and husband Brownie of Fort Gay; two nephews, John Watts and wife Anita and their daughter, Jade, all of Perry County, and Neil Watts of Blackey; and a niece, Elaine DeSario and husband David and son, Alex, of Louisa.

Funeral services were held August 4 at the First United Methodist Church in Louisa. Burial was in Pine Hill Cemetery at Louisa.