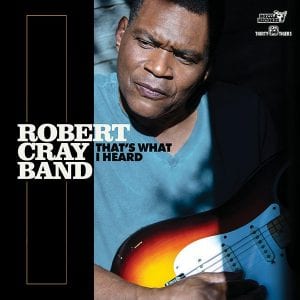 Robert Cray and Steve Jordan continue their fruitful partnership on “That’s What I Heard,” a collection where the guitarist and singer’s original songs blend seamlessly with a strong set of less than famous covers.

Cray and Jordan, who produces while also adding drums and percussion, have collaborated on several albums, including Cray’s excellent previous record where he was joined by musicians who played for Hi Records.

On “That’s What I Heard,” Cray is back in the studio with his longtime band, including redoubtable bass player Richard Cousins, keyboardist Dover Weinberg and new drummer Terence F. Clark.

The band’s sound explodes right out of the gate on “Anything You Want,” another of Cray’s typically unresolved relationship songs. Clark’s performance is especially crisp. Then, the romantic is followed by the devout with a take on the Sensational Nightingales’ traditional “Burying Ground.”

Among the other Cray originals, “Hot” is exactly what the title says; “This Man” is a deep groove with topicality; while “To Be With You” and “Can’t Make Me Change” are blues with a lean and clean guitar sound.

Cousins co-wrote “A Little Less Lonely” and ‘You’re the One” is from the Bobby “Blue” Bland songbook. “You’ll Want Me Back” was written by Curtis Mayfield and recorded by The Impressions.

The tearful “Promises You Can’t Keep” includes Steve Perry on backing vocals, with Ray Parker Jr. playing guitar on album closer “Do It,” a rarity from Billy Sha-Rae that sounds like Marvin Gaye borrowing some of Mitch Ryder’s Detroit Wheels.

Cray, at 66, is no longer the new kid on the scene, but his youthful looks match his vigorous performances on “That’s What I Heard,” an album that expertly balances blues, R&B and soul and keeps up his streak of strong and extremely pleasing efforts.