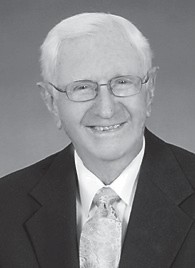 A son of the late George B. and Ardelia Caudill Ison, he was a 1940 graduate of Kingdom Come Settlement High School in Linefork.

He was graduated in 1948 from Georgetown College (Lambda Chi Alpha Fraternity), coached Kentucky high school basketball from 1948 until 1955 before advancing to Principal of Dry Ridge High School, Superintendent of Walton- Verona and ultimately integrated the Carroll County High School system as superintendent of that organization.

After administrative retirement, he worked as an administrator for the State of Kentucky, Department of Agriculture in Frankfort. He was a member of the Forks of Elkhorn Baptist Church.

Funeral services for Mr. Ison will be held at 11 a.m. today (May 17) at New Castle Christian Church. Interment will follow at the Graham Presbyterian Church Cemetery in North Vernon, Ind.

Memorial contributions may be given to Forks of Elkhorn Baptist Church Building Fund at 495 Duckers Road, Midway, KY 40347.