Robinson says Wildcats will bouce back

Kentucky fans were mad after the Cat’s 31-17 loss at Mississippi State that was filled with turnovers on offense and missed tackles on defense. Coach Mark Stoops and his players were mad, too.

“Any time you lose you are mad. We know what we can do and we didn’t do it,” Stoops said.

Now Kentucky has to try to find a way to regroup when it hosts Tennessee Saturday night after both Georgia and Mississippi State easily shut down the UK offense.

However, Kentucky’s 6- 0 start that prompted national championship/Sugar Bowl talk and more might have been fool’s gold considering how the six teams UK beat have fared.

Louisiana-Monroe is 2-3 and Chattanooga 5-3. Missouri, South Carolina, Florida and LSU are all 4-4. None of the teams are ranked yet four of UK’s wins were by a touchdown or loss — not exactly dominating play.

Turnovers have also been a huge problem — and were at Mississippi State when UK had four more. It’s hard to keep winning when a team is losing the turnover battle almost every week. 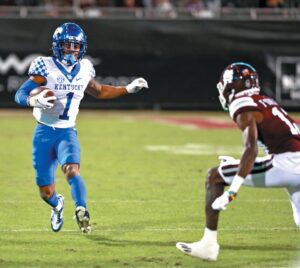 Wan’Dale Robinson (1) says Kentucky has to get back to work and remember the season is not over after backto back losses to Georgia and Mississippi State. (UK Athletics Photo)

Wan’Dale Robinson, Kentucky’s leading receiver, says there’s only one way for the Cats to respond to consecutive losses.

“We have to come back and work,” Robinson, who had nine catches at both Georgia and Mississippi State, said after the State loss. “At the end of the day, it (the season) is not over. We still have a chance to do things that have not been done in a long time. We just have to come back to work and come out with a different mentality.”

What mentality is that?

“Just that aggression, being the more dominant team and letting things happen,” Robinson said. “We had practiced really well (before the State game). We didn’t expect that outcome.” s

Freshman TyTy Washington and Georgia transfer Sahvir Wheeler have been UK’s most impressive backcourt players during preseason workouts as UK looks to the season opener Nov. 9 against Duke.

So where does that leave sophomore Dontaie Allen in UK’s playing rotation?

“That’s all on Dontaie,” said UK Radio Network analyst Mike Pratt. “He can shoot it. No doubt about that. But there seems to be some issues with Dontaie and whether he is able to stay within the offense. He has to figure out where he fits in the offense and then do it every time without wandering.

“The kid is a shooter. He has to figure out where to be, wait for the ball and then shoot it with confidence.”

Pratt said Allen has to at least be adequate defensively for Calipari to play him.

“Calipari wants more than adequate defense from him but will be satisfied if Dontaie can just do that,” Pratt said. “Just stay between the ball and the basket.

“Then he needs to shoot the ball when has the chance. If he doesn’t do those things, other players will move ahead of him and stay ahead of him.” s

Kentucky will officially open its basketball season Nov. 9 in New York against Duke and coach Mike Krzyzewski, a man who once played against UK Radio Network analyst Mike Pratt.

Kentucky beat Army 80-65 early in the 1968-69 season when Krzyzewski was a senior and Pratt a junior playing for coach Adolph Rupp.

“Army had a very good team (20-5) and they came to our Christmas tournament,” Pratt said. “I have talked to K (Krzyzewski) about it briefly a few times.

“It’s going to be cool to start the season with that game even though it will probably be 9:30 or later when it starts and it won’t get over until midnight. But it is always fun in Madison Square Garden and certainly will be going against K this time.”

That’ s because this is Krzyzewski’s final season. He has been at Duke since 1980 and has won five national championships and been to 12 Final Fours.

“This will be the opening of his farewell tour,” Pratt said. “Who knows? He might get a few favorable calls but in all seriousness he has had some kind of coaching career and it is kind of neat that the first game of his final season is against Kentucky.” s

Quote of the Week: “ Having a lot of talent beats not having enough talent. That gives Coach an opportunity to play different ways. We may play small or go big. We can go with big forwards or all guards. The ability to do that is what coach dreams of,” Kentucky assistant coach Orlando Antigua on the basketball team’s versatility.