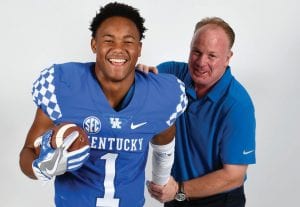 It’s not a trip for everyone, but for Western Hills standout Wandale Robinson it was a long trip that was worth every mile he spent on the road.

He recently made an unofficial visit to Ohio State to visit with the coaches. He then headed to Florida State for another unofficial visit and worked out there. He came back home to Frankfort through Alabama and made a stop there to see coach Nick Saban and his staff. His performance there was impressive enough to get him a scholarship offer from Alabama.

Robinson now has 19 major scholarship offers, including Ohio State and Kentucky. But the one from Alabama is a head-turner for a lot of reasons and shows what running the 40-yard dash in 4.22 seconds as Robinson did at a combine in February can do.

“That offer is really a huge thing for any player,” Western Hills coach Don Miller said. “Alabama is the top program across the United States when it comes to college football. It was just another really special offer for him to put with the other offers he has.” 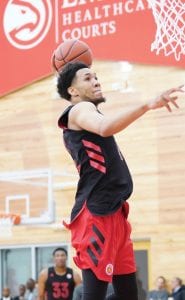 Justin Rowland, publisher of CatsIllustrated.com for Rivals, admits he didn’t think Robinson would end up with such lofty offers when his recruitment started. But few did since he was not even the top-rated recruit in Kentucky.

“That’s no knock on him. You just figure Alabama and Ohio State are going to mostly focus on national guys who people have known about for years,” Rowland said. “Robinson’s offers from those schools are a sign that the sport is about speed more than ever. He’s in the most elite company when it comes to making things happen with the ball, size aside, and that counts for a lot these days.”

Robinson originally planned to make his college choice before his senior season started. That’s probably going to change now since both Alabama and Ohio State want him to make an official visit during the season. Previously he had indicated he would make official visits to Kentucky and Duke, his top two schools before the Ohio State and Alabama offers came, along with Purdue and Virginia.

“He’s going to have a tough decision and with the Alabama and Ohio State offers, it’s going to push back the decision date,” the Western Hills coach said.

Robinson made an official visit to Michigan (which has a verbal commitment from Trinity defensive end Stephen Herron, the state’s top-ranked player) last weekend and this week had a three-day Rivals100 Five-Star Challenge in Atlanta where the nation’s top 200 players get a chance to play at Mercedes-Benz Stadium, the home of the Atlanta Falcons, and run drills conducted by former NFL players and coaches. It’s an all-expense paid trip thanks to adidas and a chance to get the attention of even more college coaches.

“He would really like to be a five-star player and knows a big performance at the camp could do that for him,” Miller said.

The 5-9, 175-pound Robinson rushed for 2,330 yards and 33 touchdowns last season and also caught 22 passes for 314 yards and six touchdowns. In his threeyear career, he has amassed 85 touchdowns.

Robinson will get a two-week break when Western Hills begins the KHSAA-mandated two-week dead period Friday. After that, Miller said Robinson will have to talk with those closest to him about what he wants to do next.

Alabama has come into Kentucky in recent years to sign Madison Southern running back Damien Harris and Lafayette offensive lineman Jedrick Wills. The Crimson Tide has a verbal commitment from Glasgow offensive lineman Tanner Bowles, a top five recruit in Kentucky, this year.

While some may wonder why the New York Knicks took Kentucky freshman Kevin Knox with the ninth pick in the NBA draft, John Calipari thinks the Knicks got a steal.

“It’s a futures league. He’s 18 years old. You’re trying to project who of these guys can be special, and when you look at what they were having at that pick, if that kid is a year or two older, he’s the one, two or three pick,” the Kentucky coach said. “Physically, he’ll come into his own quicker than everybody thinks he will, and the league is moving to 6-foot-9 shooters, [being] able to play multiple positions, and he can do that.”

Calipari compared him to Boston Celtics rookie Jayson Tatum, a former Duke star. Knox has a 7-foot wing span and could become the breakout star next season that Tatum did in Calipari’s opinion.

“A big 6-foot-9 [forward] with the ability to score, block shots and do the things that he does, there’s similarities,” Calipari said about Tatum and Knox.

Some players can be overwhelmed with the media and fans in New York. Calipari doesn’t see that being a problem for Knox.

“He was at Kentucky,” Calipari said. “Every game the anticipation is to win and so I don’t think that will faze him.”

“I’ve known some of them since AAU. I’ve known (Quickley), I’ve played with him. He’s really good,” Kentucky sophomore P.J. Washington said. “All the guys are really good.

“They play a lot of basketball. They get in here, they focus on their game, they work on their stuff. So, if they keep that same mentality they’ll be all right this season. I feel like they’ve just got to be mentally tough.”

Sophomore guard Quade Green likes that all the newcomers are shooters and have a fearless attitude.

“They’re not scared of nothing. When we play five-on-five they go against us. They don’t act like they’re scared of nothing, so that’s what I like about them,” Green said. “All of them stand out, all of them are good at what they do.”

Jemarl Baker redshirted last season so this year will be his first time to get on the court as well.

“All of them can play whether it’s Keldon getting to the rim and finishing, Tyler scoring, Quick scoring, EJ just playing basketball – he’s a really good player. Everybody just is doing really well,” Baker said.

Sophomore center Nick Richards says they all have “little different traits” that he likes and all are “pretty competitive dudes” daily.

“We got at each other every day in pickup. That’s the trait that all of them have and that’s going to make us better,” Richards said.

Washington seems particularly enamored with what Montgomery, a 6-9 interior player, can add to the team this season.

“He is very versatile. He can do a lot of things on the court. He can dribble, he can shoot, he can pass. Just having that with a big guy down there really helps us. He can pick-and-pop. If Quade comes off a screen and he picksand pops and shoots a 3, I feel like that’s going to be helping us a lot,” Washington said. “A lot of guys can’t really do that in this conference, so just having a guy like that is really going to be helpful.”

One name to remember for future Kentucky basketball recruiting is 6-8 Jaemyn Brakefield of Huntington (W.Va.) Prep. He has 15 scholarship offers, including Alabama, Kansas, South Carolina and Mississippi.

He’s a consensus top 20 player in the 2020 recruiting class, but does not have a scholarship offer from Kentucky yet. However, Rivals.com recruiting writer Dan McDonald reported that Kentucky had an assistant coach watch him during an event in Atlanta this spring. The five-star forward has also been at UK several times for unofficial visits.

ESPN college basketball analyst Jay Bilas expects high school players to be able to go directly to the NBA if they are good enough sometime in the next few years.

Bilas just hopes everyone remembers why the one-and-done rule came into existence.

“The one-and-done rule came in for a reason, and the reason was the NBA was tired of having high school players and they were tired of having their scouts and NBA personnel sitting in high school gyms. And college coaches were thrilled with the one-and-done rule when it first came in because they were having to recruit players that ultimately, whether they projected them or not, went pro out of high school,” Bilas said. “So they still had to recruit guys in a belt-and-suspenders approach.

“So it was a mess. And I wouldn’t argue with anybody that says there are messy parts to it now. But my stance has always been for any college team, if you don’t want a one-and-done player, it’s pretty easy; you don’t have to recruit them. Nobody is making you do it.”

Bilas said doing away with the one-and-done won’t fix problems that college basketball might have.

Quote of the Week 2: “I still don’t think you can make a bad shooter into a great shooter, but you can make an average shooter into a good one, just with the amount of time they put into it, the reps, change in mechanics. The NBA has proven they can do that over the years with guys that are willing workers,” ESPN college basketball analyst Jay Bilas on developing shooters in the NBA.

Quote of the Week 3: “He loves golf probably more than anybody I know and if you follow him on Twitter, you can tell he shoots (high) scores but still always wins money every time,” Web.com Tour player Josh Teater of Lexington on former UK football coach Rich Brooks.