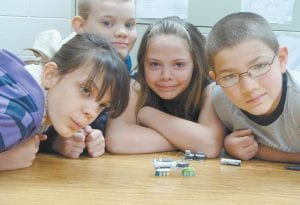 Gabriel Burns’s 4th grade math class at Martha Jane Potter Elementary School recently studied the many connections that mathematics has to real life in the form of applications. Several of the students were very interested in the field of mechanics and robotics and decided they would build a small robot using a rotary motor, copper wires, batteries, stabilizers, and a pair of toothbrush heads. The “bristle-bot” robot was able to sustain itself and maneuver in circles (small to large) on a table located in the center of the classroom. Included in the photo above are (not in order) students Michelle Sexton, Caleb Fox, Katie Hughes and John Gibson.