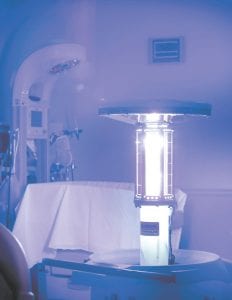 They sweep. They swab. They sterilize. And still the germs persist.

In U.S. hospitals, an estimated 1 in 20 patients pick up infections they didn’t have when they arrived, some caused by dangerous ‘superbugs’ that are hard to treat.

The rise of these superbugs, along with increased pressure from the government and insurers, is driving hospitals to try all sorts of new approaches to stop their spread:

While these products can help get a room clean, their true impact is still debatable. There is no widely-accepted evidence that these inventions have prevented infections or deaths.

Meanwhile, insurers are pushing hospitals to do a better job and the government’s Medicare program has moved to stop paying bills for certain infections caught in the hospital.

Those hospital infections are tied to an estimated 100,000 deaths each year and add as much as $30 billion a year in medical costs, according to the Centers for Disease Control and Prevention. The agency last month sounded an alarm about a “nightmare bacteria” resistant to one class of antibiotics. That kind is still rare but it showed up last year in at least 200 hospitals.

Hospitals started paying attention to infection control in the late 1880s, when mounting evidence showed unsanitary conditions were hurting patients. Hospital hygiene has been a concern ever since, with a renewed emphasis triggered by the emergence a decade ago of a nasty strain of intestinal bug called Clostridium difficile, or C-diff.

The diarrhea-causing Cdiff is now linked to 14,000 U.S. deaths annually. That’s been the catalyst for the growing focus on infection control, said Mayfield, who is also president-elect of the Association for Professionals in Infection Control and Epidemiology.

C-diff is easier to treat than some other hospital superbugs, like methicillinresistant staph, or MRSA, but it’s particularly difficult to clean away. Alcoholbased hand sanitizers don’t work and C-diff can persist on hospital room surfaces for days. The CDC recommends hospital staff clean their hands rigorously with soap and water — or better yet, wear gloves. And rooms should be cleaned intensively with bleach, the CDC says.

Michael Claes developed a bad case of C-diff while he was a kidney patient last fall at New York City’s Lenox Hill Hospital. He and his doctor believe he caught it at the hospital. Claes praised his overall care, but felt the hospital’s room cleaning and infection control was less than perfect.

“I would use the word ‘perfunctory,’” he said.

Lenox Hill spokeswoman Ann Silverman disputed that characterization, noting hospital workers are making efforts that patients often can’t see, like using hand cleansers dispensers in hallways. She ticked off a list of measure used to prevent the spread of germs, ranging from educating patients’ family members to isolation and other protective steps with each C-diff patient.

The hospital’s C-diff infection rate is lower than the state average, she said.

Westchester Medical Center, a 643-bed hospital in the suburbs of New York City has also been hit by cases of C-diff and the other superbugs.

Complicating matters is the fact that larger proportions of hospital patients today are sicker and more susceptible to the ravages of infections, said Dr. Marisa Montecalvo, a contagious diseases specialist at Westchester.

There’s a growing recognition that it’s not only surgical knives and operating rooms that need a thorough cleaning but also spots like bed rails and even television remote controls, she said. Now there’s more attention to making sure “that all the nooks and crannies are clean, and that it’s done in as perfect a manner as can be done,” Montecalvo said.

Enter companies like Xenex Healthcare Services, a San Antonio company that makes a portable, $125,000 machine that’s rolled into rooms to zap C-diff and other bacteria and viruses dead with ultraviolet light. Xenex has sold or leased devices to more than 100 U.S. hospitals, including Westchester Medical Center.

The market niche is expected to grow from $30 million to $80 million in the next three years, according to Frost & Sullivan, a market research firm.

“We all like it,” she said of the Xenex.

At Cooley Dickinson Hospital, a 140-bed facility in Northampton, Mass., the staff calls their machines Thing One, Thing Two, Thing Three and Thing Four, borrowing from the children’s book “The Cat in the Hat.”

But while the things in the Dr. Seuss tale were house-wrecking imps, Cooley Dickinson officials said the ultraviolet has done a terrific job at cleaning their hospital of the difficult Cdiff.

“We did all the recommended things. We used bleach. We monitored the quality of cleaning,” but Cdiff rates wouldn’t budge, said nurse Linda Riley, who’s in charge of infection prevention at Cooley Dickinson.

A small observational study at the hospital showed C-diff infection rates fell by half and C-diff deaths fell from 14 to 2 during the last two years, compared to the two years before the machines.

Some experts say there’s not enough evidence to show the machines are worth it. No national study has shown that these products have led to reduced deaths or infection rates, noted Dr. L. Clifford Mc- Donald of the Centers for Disease Control and Prevention.

His point: It only takes a minute for a nurse or visitor with dirty hands to walk into a room, touch a vulnerable patient with germy hands, and undo the benefits of a recent space-age cleaning.

“Environments get dirty again,” McDonald said, and thorough cleaning with conventional disinfectants ought to do the job.

Beyond products to disinfect a room, there are tools to make sure doctors, nurses and other hospital staff are properly cleaning their hands when they come into a patient’s room. Among them are scanners that monitor how many times a health care worker uses a sink or hand sanitizer dispenser.

Still, “technology only takes us so far,” said Christian Lillis, who runs a small foundation named after his mother who died from a Cdiff infection.

Lillis said the hospitals he is most impressed with include Swedish Covenant Hospital in Chicago, where thorough cleanings are confirmed with spot checks. Fluorescent powder is dabbed around a room before it’s cleaned and a special light shows if the powder was removed. That strategy was followed by a 28 percent decline in C-diff, he said.

He also cites Advocate Christ Medical Center in Oak Lawn, Ill., where the focus is on elbow grease and bleach wipes. What’s different, he said, is the merger of the housekeeping and infection prevention staff. That emphasizes that cleaning is less about being a maid’s service than about saving patients from superbugs.