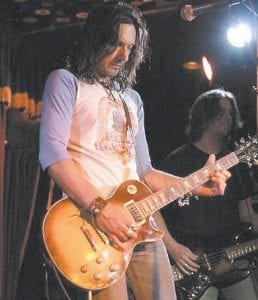 Whitesburg is the place to be this weekend for fans of rock music who want to see top-quality national acts performing live at bargain prices.

The action is scheduled to get underway around 9 p.m. on Friday when California band Worry Beads takes the stage at Summit City on Main Street. Opening for Worry Beads will be The Bottle Rocket Symphony.

Visiting the Summit City stage on Saturday night is Lauderdale, a band from Muscle Shoals, Ala., guaranteed to be popular with fans of other alt.country bands such as Drive- By Truckers, Jason Isbell and the 400 Unit, and Lucero. Opening for Lauderdale will be The Benways.

Worry Beads marks the return to Whitesburg of two musicians who were the first rockers with a national following to perform at Summit City when the venue opened last summer – ex-Bang Tango members Mark Knight and Mark Tremalgia.

Always better than the “hair metal” bands it was most often identified with in the late 1980’s, Bang Tango, which was founded by lead guitarist Knight, had two Top 10 MTV video hits while on its way to selling more than a million records and opening for such legendary bands as Cheap Trick, Alice in Chains, and Mother Love Bone.

“…The hard rockin’ quintet was one of the few groups to incorporate funk into its sound – some time before the Red Hot Chili Peppers and Faith No More made it acceptable to do so …,” the All Music Guide (www.allmusic.com) says today of Knight’s work in Bang Tango.

After Bang Tango disbanded in the early ’90s, Knight returned to Malibu and started writing songs more in line with those from the great ’70s bands that had the most influence on him – bands like Led Zeppelin and The Rolling Stones. Knight has worked with Bernard Fowler, the legendary backup singer with The Stones, done session work with the late Nicky Hopkins, a frequent Stones contributor whose keyboard work appears on many rock classics, and played with Gov’t Mule drummer Matt Abtts, who has been instrumental in helping Worry Beads shape its sound.

Tremalgia is a successful musician in his own right, having supported bands ranging from ’60s stalwarts The Chambers Brothers to current stars Lincoln Park in addition to playing guitar with Bang Tango.

Other members of Worry Beads are bass player Steve Walter, who was producing tracks for several MCA artists when he got the call from bandmate Tremalgia, and drummer Edward Shemansky, whose style is reminiscent of Jon Bonham.

Before embarking on its current tour, Worry Beads had been performing in well-known Los Angeles clubs such as The Roxy, Viper Room and “the world famous” Whisky a Go Go.

Admission to the Worry Beads show is $7.

Lauderdale, the featured performers for Saturday night, formed in early 2005 in the Shoals area of northern Alabama, where each member was born and raised. The band’s sound has been hailed “rock and roll without any pretensions,” and has been compared also to the Jayhawks, R.E.M., and Grant Lee Buffalo.

“They are musicians who create music for dancing, driving, drinking and dreaming,” said review in Bliss magazine. “Their music can’t be pigeonholed or categorized. It is resonant, complex and simply beautiful.”

The band’s debut album can be heard at myspace.com/ lauderdalemusic. It is available for purchase at iTunes.com.

Admission to Lauderdale’s show is $5.