‘Rock Band 2’ is coming this fall 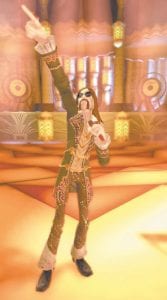 “Rock Band” is ready for an encore.

A sequel to the play-along music game that redefined the genre last year will be released first for the Xbox 360 in September, according to publisher MTV Games and developer Harmonix. “Rock Band 2” will feature a new variety of instruments, online modes and songs, and will allow players to import their previously purchased “Rock Band” tunes.

“With the original ‘Rock Band,’ the focus was on innovation,” Harmonix co-founder and CEO Alex Rigopulos told The Associated Press. “With ‘Rock Band 2,’ the focus is on perfection of the experience. We’ve had a year to listen to our fans and build out the scope, depth and polish of the experience, so it feels like a second-generation band game.”

“Microsoft has been a great partner for ‘Rock Band,'” said Van Toffler, president of MTV Networks Music Group, which oversees the “Rock Band” franchise. “It’s just so easy to download the content using the Xbox 360 system. It’s evolved into a great marketing partnership as well. They’ll really blow it out for us.”

“Rock Band” allows up to four gamers to form a virtual band, thrashing and singing along to songs with friends online or in-person on various phony instruments. The second edition will feature a playlist of over 80 songs – all master recordings – which will include more female-fronted bands and artists who have never contributed tunes to a music game.

If you’ve already downloaded a song for the original “Rock Band” – at about $1.99 per track, which can’t be transferred to an MP3 player – it will immediately be loaded into your “Rock Band 2” song list without needing to be repurchased or redownloaded. It’s the first time such retroactive compatibility has been introduced in a music game.

“It’s the No. 1 most-requested feature from our fans,” said Rigopulos.

All prior versions of “Rock Band” instruments, as well as many from the competing “Guitar Hero” franchise, will also be compatible with “Rock Band 2.” Harmonix will unleash a collection of new instrument-shaped controllers, including a sturdier drum kit and a Fender Stratocaster reproduction guitar lined with faux wood-grain buttons.

“For fans interested in hardware, the second-generation peripherals are an amazing step forward from the first-generation guitar and drums,” said Rigopulos of Harmonix, which created the first two “Guitar Hero” games. “The instruments make huge strides in both fit and finish as well as features and functions.”

Thus far, over 15 million songs of the over 200 available tracks have been downloaded from the “Rock Band” online music store since the game’s launch last November. The catalog includes songs from rock acts such as The Rolling Stones, Blondie, The Cars, Wolfmother, Queens of the Stone Age, Smashing Pumpkins, Sonic Youth and Jimmy Buffett.

MTV Games and Harmonix are releasing 12 “Rock Band” songs on July 15 from The Who – ranging from “My Generation” to “Who Are You” – that all utilize the band’s master recordings. The tracks will be available for $1.99 individually or $19.99 together. The special release coincides with the upcoming “VH1 Rock Honors” ceremony commemorating The Who.

“Their music really comes alive when you’re playing it,” said Rigopulos. “We were trying to release ‘Who’s Next’ in its entirety, but we were unable to locate all the masters. So in the face of that, Pete (Townshend) and Roger (Daltrey) helped curate this best-of soundtrack of everything we were able to find.”

The official announcement of “Rock Band 2” means the industry’s rhythm game rivalry will enter a three-way matchup this fall against Activision and RedOctane’s latest “Guitar Hero” title and Konami’s newmusic game-on-the-block “Rock Revolution,” which will use the Wii’s controllers to simulate air guitars and drums.

Playing music on plastic guitars has become a big business. “Guitar Hero III” has sold 2.5 million units while “Rock Band” has moved 1.3 million units. Both music games are in the top- 10 moneymakers for 2008 so far, according to the most recent monthly video game sales data from NPD Group analyst Anita Frazier.

Rigopulos wouldn’t comment on how much “Rock Band 2” would cost. The original game bundled with all the instruments went for about $170 at launch. Rigopulos said MTV Games, Harmonix and distributor Electronic Arts were making every effort possible to provide several choices for consumers looking to gear up for “Rock Band 2.”

“Guitar Hero World Tour” – the fourth iteration of the franchise that started the music-game trend – will be released in October and will feature a “Rock Band”-like assemblage of peripheral instruments for the first time, as well as the ability make instrumental music, a feature Rigopulos said won’t be found on “Rock Band 2.”

MTV Games and Harmonix plan to announce additional “Rock Band 2” details – including the game’s playlist – at the E3 Media and Business Summit in July. MTV executive Toffler hinted that “Rock Band 2” will be expanding upon idea of what it means to play online as well eventually broadening the musical genres of available downloadable content.

“I believe we’re going to see global online competitions where bands performing throughout the world will compete against each other,” said Toffler. “I’m personally excited to open up the genres of music to country, hip-hop and R&B. We’ve just scratched the surface, really.”