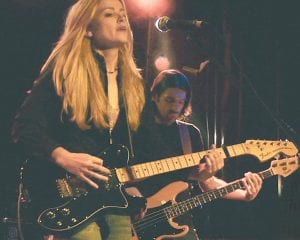 Anne McCue will perform in Whitesburg on Thursday night. The guitarist and singer and songwriter began her successful career in Australia. (Photo by Melissa Donovan)

An Australian rock and blues musician who Lucinda Williams has called her “new favorite artist and an amazing guitarist” will perform this week at Summit City in Whitesburg.

Anne McCue, who now lives in Nashville, Tenn., is scheduled to take the stage at Summit City at 8 p.m. on Thursday. Admission is $8.

“I actually perform a Neil Young song,” McCue said while describing the set of music she’ll be performing in Whitesburg. In addition to Young’s “Southern Man,” McCue will also perform songs by Jimi Hendrix and the aforementioned White, whose “As the Crow Flies” gives McCue a chance to shine on a blues guitar workout which has become a centerpiece of her live performances.

McCue says that when it comes to performing on stage, she leaves the folk side of her catalogue at home.

“I mainly like to play the rocking blues stuff,” she said. “It’s the most fun.”

McCue’s latest album, “Broken Promise Land,” was released in May and features the rhythm section of Ken Coomer of Uncle Tupelo and Wilco and Bones Hillman of the Australian band Midnight Oil.

The album also features the song “Don’t Go to Texas (Without Me),” which Mc- Cue says is a tribute to rock star Chrissie Hynde and her band the Pretenders.

“Definitely the first Pretenders album is one of the greatest rock albums of all time,” McCue said Monday.

McCue said she wrote nearly every song on “Broken Promise Land” as a tribute to artists who have helped influence her career. She said the title track was written with early AC/ DC (when Bon Scott was alive and singing) and Suzi Quatro in mind, while the song “Ol’ Black Sky” is a tribute to Led Zeppelin. The album is also influenced by the Australian band Rose Tattoo, 1950’s guitarist Link Wray, and the Sixties British band The Yardbirds.

McCue was film student in Sydney, Australia when she decided to become a singer and songwriter. She made the decision after a friend showed her the movie “Don’t Look Back,” a 1965 film about Bob Dylan which was being re-released in Australia when she saw it in the 1980s.

“It was a long time ago — at school in the Eighties,” she said. “They hadn’t shown that film in Australia in 20 years. It really made me determined to be a singer, songwriter and musician.”

McCue said that after determining she wanted to make a living in the music business, she then had to overcome a bout of shyness which was so bad early on that she and her first band “performed” their only concert by placing speakers outside the windows of a home and staying hidden inside to play.

After that band broke up in 1988, McCue moved to Melbourne, Australia, where she spotted an advertisement in a newspaper seeking a “wild woman for a rock and roll band.”

“They asked for me to be the guitar player,” she said, referring to three other females who with McCue went on to form the band Girl Monstar.

Girl Monstar released two successful singles in Australia in 1988 and eventually released their debut album, “Monstereo Delicio,” in 1992. McCue left the group in 1993, but not before they had opened concerts for such acts as the Ramones, Buzzcocks and Skid Row.

“We were together for five years,” she said, “and we toured all over Austrailia.”

McCue said that after Girl Monstar split up she “had to learn how to be a front person. The singing for me was the hardest part, because I tended to be a little introverted.”

McCue then signed on with another band, Eden AKA, which was signed to a record deal with Columbia Records and performed at the Lilith Fair concerts headlined by Canadian pop star Sarah McLachlan.

“After two years I got really sick of it and I quit,” she said.

McCue said she learned how to be a complete musician after “joining all the blues jams in Melbourne” and later spending a considerable amount of time in Vietnam, where she played shows six nights a week.

“It was very liberating,” she said. “Country, rock, blues, jazz — I could play anything I wanted while I was there. It was fun.”

McCue has opened a number of concerts for Lucinda Williams and Heart, whose guitarist, Nancy Wilson, has described McCue as her “Aussie clone.”

“Listeners will delight in her slide guitar prowess, as well as her pointed and powerful lyrics,” said a review in the Seattle Post
Intelligencer.