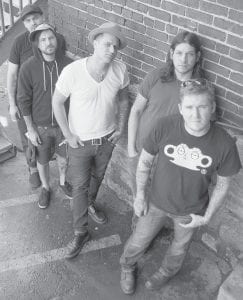 The Gaslight Anthem (from bottom right, Brian Fallon, Benny Horowitz, Alex Levine, Alex Rosamilia, and Ian Perkins) posed for a portrait recently at the Cannery Ballroom, in Nashville, Tenn. The band relocated to Nashville in February 2012 and hooked up with Grammy-winning producer, Brendan O’Brien, at Blackbird Studios, to work on their new album, “Handwritten.” (Photo by Ed Rode/Invision/AP)

The guys in The Gaslight Anthem aren’t here to save rock ‘n’ roll.

“Handwritten,” the much anticipated new release from the New Jersey quartet (a fifth member, guitarist Ian Perkins, tours with the band), has a lot of high hopes pinned to it. The band is seen by many as one of guitar-driven rock’s potential latter-day heroes, and the guys in the group say they hear that kind of crazy chatter all the time.

“There are a lot of bets on the table right now,” lead singer Brian Fallon joked.

“I think we all try not to think about that and take it one day at a time,” guitarist Alex Rosamilia said. “We recorded a record that we all like. It happens to be a rock record, but we didn’t do it to try to save rock ‘n’ roll. That’s a pretty pompous thing to do.”

They agree with Foo Fighters frontman Dave Grohl’s recent statement that rock has hit a stagnant period, much like in the late 1980s before Grohl’s Nirvana rewrote the rules. Everyone’s into dance music and singles again, much of the guitar rock has become blase and radio airplay dwindles daily.

Fallon was just turning onto music when “Nevermind” came out and remembers the sea change in pop music.

“It kind of feels like when I was a kid in the very late ‘80s or 1990 — every band had the heavy ‘80s song and then they had the ballad, and then all (of ) the sudden these garage bands came and it was like, ‘Whoa, what is this?’” Fallon said. “My mom says, ‘That sounds like Led Zeppelin. That’s nothing new. This is just cyclical. It goes in cycles.’”

And like the rest of his bandmates, he doesn’t buy the talk that they’re the ones to lead the charge this time around.

“I don’t think that we’re the Nirvana,” Fallon said. “I think somebody else is going to have to be them.”

“ Maybe,” drummer Benny Horowitz said, “we can at least be the Mudhoney of this era.”

They’ve been compared to everyone, from Bruce Springsteen to the Replacements, but on “Handwritten,” the band feels like they’ve taken a step in their evolution. And they had to get away from all those opinions to do it.

Though they’re based in New Jersey, they left the Garden State for Nashville, Tenn., in February and joined Grammy-winning producer Brendan O’Brien at Blackbird Studios, owned by country star Martina McBride and her husband, John, thus shaking loose from all those folks who might normally distract. The trip to Nashville not only produced an album they’re excited about, but also proved their bond remains strong as they move past the halfdecade mark.

“I think it really turns into more of a family thing,” Horowitz said. “You don’t have to have those everyday social niceties that you usually do. Like every day you don’t have to go, ‘How’d you sleep? How was your night?’ or nothing like that. We’ve done this together close to 250 to 300 days a year for the last five or six years. When it comes to that, you can tell your brother, don’t talk to me for a day, and tomorrow everything’s cool. Nobody’s going anywhere.”

“It turns out we like each other,” bassist Alex Levine said.