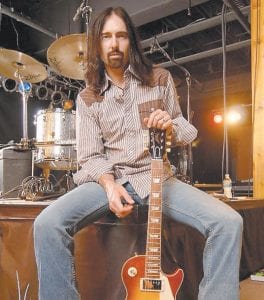 Damon Johnson, a guitarist and singer-songwriter best known for his work with Alice Cooper and Brother Cane, will perform in concert Saturday in Whitesburg. To hear Johnson’s music, visit www.damonjohnson.com. (Photo by Stephen Jensen/www.F3Studios.com)

While it would be an understatement to say that much has changed for Johnson during the time between that show at the Eastern Kentucky Expo Center in Pikeville and what will be his first solo appearance at Summit City in Whitesburg this Saturday, it’s also worth noting that much remains the same for the 46-year-old musician who is also well known for his success with the southern hard rock band Brother Cane.

After performing with Cooper for three years, Johnson quit the band in 2007 so he could devote his full professional attention to his then-new country music group Whiskey Falls, which had just released a self-titled debut album that produced two Top 40 songs on Billboard’s Country Music Chart (the songs “Last Train Running” and “Falling Into You” reached No. 32 and No. 40, respectively.) 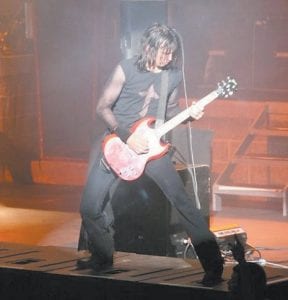 While Whiskey Falls remains a viable group (its “Load Up the Bases” which is used as a theme song during Atlanta Braves telecasts on FSN South), it has yet to release a second album, freeing Johnson to return to the road with Cooper in 2009.

When Johnson takes the stage Saturday, he won’t be drawing only from his days with Cooper, who is soon to be inducted in to the Rock and Roll Hall of Fame, or with Brother Cane, which toured with Van Halen, Aerosmith and Robert Plant and is best known for the song “And Fools Shine On” which appeared in the 1995 film “Halloween: The Curse of Michael Myers,” or with Whiskey Falls or his other bands of note, Slave to the System and The Welfare.

Johnson has also written songs that have appeared on albums by Carlos Santana (“Just Feel Better” from All I Am), Fleetwood Mac’s Stevie Nicks (“Everyday” from Trouble in Shangri-La), Ted Nugent (“I Won’t Go Away” from Craveman), Skid Row (“Ghost,” “See You Around,” and “Down From Underground” from Thick Skin), and Queensryche (“Middle of Hell” and “Home Again” from American Soldier).

Admission to Saturday’s show is $14.