Rock legend tells it all 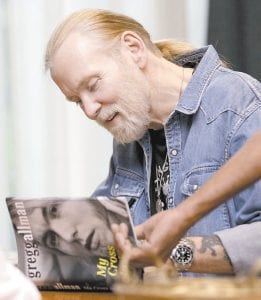 Gregg Allman, founding member of The Allman Brothers Band, signed copies of his autobiography “My Cross to Bear” on May 10 in Nashville, Tenn. (AP Photo/Mark Humphrey)

Gregg Allman thinks about his late brother Duane every day. And once in a while, he can feel his presence.

The untimely death of the game-changing rock ‘n’ roll guitarist is a central theme in Gregg Allman’s life and a big part of the Rock and Roll Hall of Fame member’s new memoir, “My Cross to Bear.”

It’s one of the “three big heavies” the normally reticent Allman tackles openly in the new book, released this month. He also takes on his problems with drug addiction, his often rocky relationships with women (including ex-wife Cher) and his seven divorces, and the early days of The Allman Brothers Band.

The 64-year-old says the book, written in a sometimes salty conversational style with music journalist Alan Light, represents his most honest and open discussion of his life. Allman isn’t inclined to overshare and both he and Light said in phone interviews they were concerned about how the talks at the heart of the book would go. 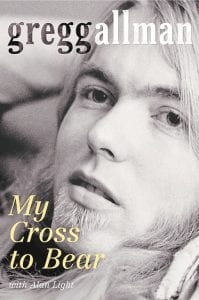 The cover of “My Cross to Bear,” by Gregg Allman with Alan Light, is shown. (AP/ William Morrow)

“I think everybody knows this isn’t Steven Tyler,” Light said. “This is somebody who’s more private in some ways for reasons that are easy to understand given his life.”

Allman began assembling notes for a memoir back in the 1980s and worked at it sporadically over the years. Light drew on previous transcripts and filled out the book with extensive interviews late last summer.

They sat down on a balcony overlooking centuries-old oak trees at Allman’s home near Savannah, Ga. Allman found the setting comforting and shared much more deeply than he thought he would, actually finding the process rewarding.

“It really helped me, it really did,” Allman said. “After it was over I was like, ‘Phew, man, who put that 20-pound weight up on my shoulder anyway?’”

Allman’s been carrying all that weight for decades. Duane Allman, a pioneering slide guitar player whose legacy still vibrates in rock ‘n’ roll and the blues, was the force who kept driving the Allman brothers toward worldwide fame as The Allman Brothers Band. He died in a motorcycle accident in 1971 just as the band was breaking out. Asked if he ever shared his feelings about his brother so deeply and so publicly, Allman said: “Never. Never.”

Allman said it was Duane who pushed him to leave their boyhood home of Daytona Beach, Fla., and go on the road.

“I left home the day after I graduated from high school because I knew we weren’t going to make any dough to pay the rent in music,” Allman said. “The Beatles had just come out and there was serious, serious dudes out there. And the competition, I mean, they were good players, too. My brother said, ‘They ain’t as good as us, baby!’ He would coax me along every step of the way. I would just love to hear one concert if he was still here.”

The Allmans would go on to reach incredible heights in the burgeoning scene, partying at the vanguard of excess while defining a sound that still excites millions of fans. Their songs “Whipping Post” and “Midnight Rider” became part of rock ‘n’ roll’s DNA and their live album “At Fillmore East,” on which they lit Blind Willie McTell’s “Statesboro Blues” on fire, still defines the live album.

Allman details how his entire band and crew fell under the spell of drugs, from early experimentation with speed and cocaine to addictions to heroin. But unlike many of their contemporaries, the group got together and resolved to kick the habit with varying degrees of success.

Still, the excesses led to Allman’s contraction of Hepatitis C and eventually a 2010 liver transplant that’s changed — and extended — his life.

Always religious in a quiet way, Allman says his recent trials have caused him to turn his life over to God after years of shunning organized religion. He always believed in God, but mostly kept his views private. He says he’s “come out of the closet” since his transplant.

“I just said, ‘Man, I ain’t drivin’ this mule no more. I’m not in the driver’s seat, you take the wheel. Take it where it’s supposed to go,’” he said. “And every time something changes and everything goes just fine. Everything works out. Things will really scramble your brain until you’re about damn near broke.”

Affairs of the heart are another area of his life that nearly left him broken over the years. He talks in-depth about his rocky relationships, including his spur of-the-moment flight to Las Vegas for his marriage to Cher — an event he immediately regretted as he daydreamed mid-ceremony: The marriage lasted from 1975 to ‘79 and produced a son.

The New York-based Light met Allman when he profiled him upon the release of his 2010 solo album “Low Country Blues.” He believes the memoir fills in the gaps of one of music history’s more interesting stories.

“From Day 1 all the way through to right now, this is not just a celebrity, not just a name, but there’s a lot of story to every piece of what his life has been,” Light said. “There’s a lot of pain, a lot of tragedy and a lot of obviously great achievement and all that.”

It’s also a story that’s still unfolding. Allman is on a book tour that took him to Atlanta, Nashville and Chicago last week after passing recent heart tests, and feels as good as he has since the liver transplant. Allman is in California this week and will be in New York next week. He feels so good, he’s been thinking about a future full of music — he plans to hit the road with The Allman Brothers Band this summer — and love. Yes, even love.

He hasn’t quite gotten past his penchant for falling in love, shyly admitting he thinks he’s done it again. He met her two Friday the 13ths ago.

“I’ve rarely ever said I don’t want to answer or I won’t talk about that — and I’m not saying that,” Allman said. “I just don’t know if right now is the right time because this is a regular person and she is just an angel and I just met her. … Well in that time, I didn’t think it could be done, but she’s just taken my heart, and I gladly gave it to her. … I am totally in love, and I don’t mind telling you.”