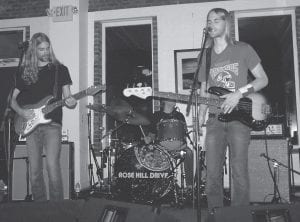 Rose Hill Drive, a band critics often compare favorably to Led Zeppelin and Cream, performed in concert last week at Summit City in Whitesburg. The band from Boulder, Colorado is led by brothers Daniel Sproul (left) on guitar and vocals and Jacob Sproul (right) on bass and vocals. The drummer is Nathan Barnes. Rose Hill Drive is touring to promote their new album, “Moon is the New Earth.” (Photo by Van Webb)