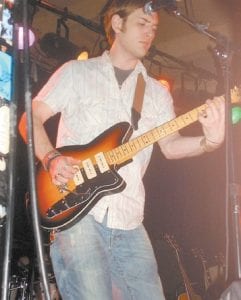 Muscle Shoals rocker Browan Lollar, left, will be in Whitesburg on Friday night for the opening of a display of his paintings at the Summit City Gallery. Shown in the photo at right is Lollar’s painting, “Down Home Technicolor,” which was used as the CD cover for the latest studio album by Jason Isbell & the 400 Unit, of which Lollar is a member.

The musical pipeline that continues to supply Letcher County with great rock from the Muscle Shoals area of northern Alabama will be filled with something extra this weekend — a free art showing before one of the performers takes the stage. Browan Lollar, above left, guitarist with Jason Isbell & the 400 Unit, will be in Whitesburg on Friday night to perform in concert and to leave a group of his paintings for display at Summit City on Main Street. A reception in honor of Lollar’s painting being shown in the Summit City gallery will begin at 7 p.m. and is free of charge. At 9 p.m., Lollar and fellow Muscle Shoals musician Michael Ledbetter, whose influences range for Pearl Jam to Bruce Springsteen, will perform a set of original material and covers of songs written by other performers who work has left a mark on their careers. Admission to the concert is $5.

Lollar, a 27-year-old native of Knoxville, Tenn., will be teaming back up with Isbell and the other members of the 400 Unit for a short tour of Europe in April. 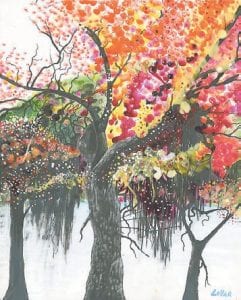 Ledbetter has been a fixture on the Muscle Shoals music scene since 1993.